ROCKY RIVER, Ohio – Spring, 2018, hasn’t exactly been very spring-like. But where other traditional signals of the season of renewal (the groundhog, Easter, baseball’s opening day) have failed us this year, the “Bell” just might be ringing in spring now, in early May.

The “Bell” is Rocky River’s Bell Track & Field Invitational, which was contested for the 43rd time this past Friday (May 4), and with the weather days before and since being full of sunshine and some breezy, only-slightly-chilled evenings, the meet appears to indeed be on track as a harbinger of spring. And of hope in the hearts (and limbs) of track & field athletes from Rocky River and seven other schools, who use the meet as a springboard toward big efforts in upcoming conference championship and postseason events.

Take, for example, the hopes of a quartet of blazing-fast sprinters from Elyria High School – Adaveon Drummer, Aaron Frost, Jordan Lucky-Baker and Tayvion Benton – who ran their way into the record books of the Bell Invitational with their tremendous performance in the boys’ 4×100-meter relay on Friday. Elyria’s fleet-footed foursome covered the course in a lightning-quick 43.28 seconds, shaving a third-of-a-second off the Bell record. 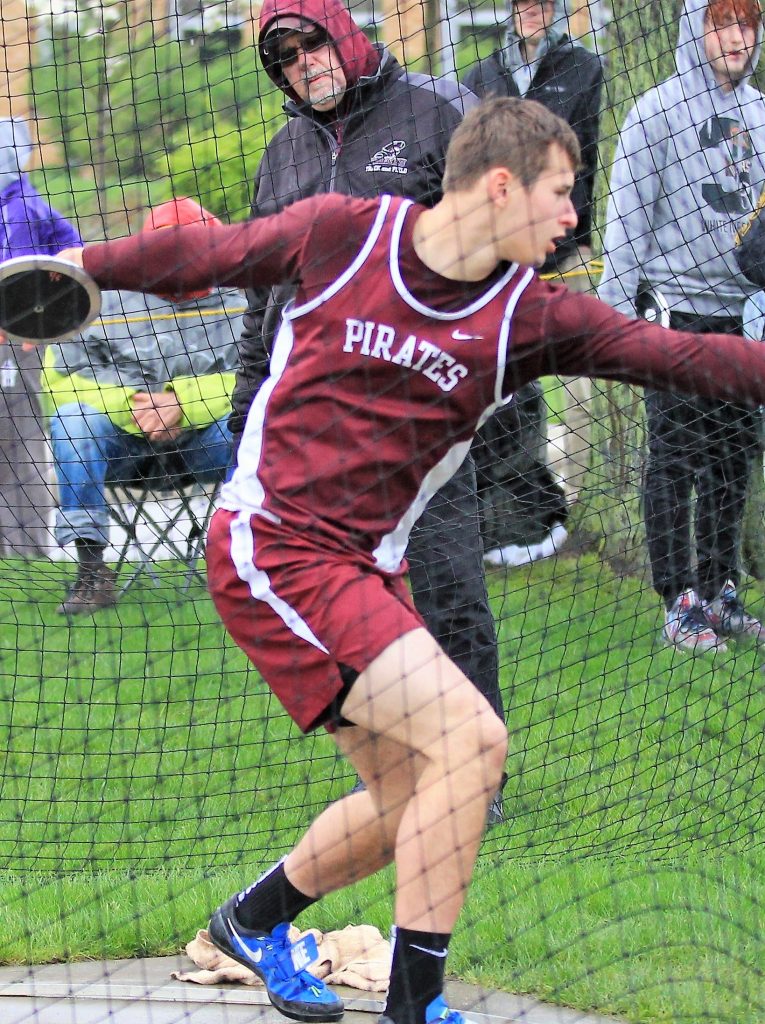 topping a shot-put record that dates back to the first year of the Bell Invitational, 1976. In track & field, 40-year-old records are like 200-year-old records. The old mark – 60 feet-2-and-a-half inches, set by a St. Ignatius athlete — may well have been recorded with a quill pen on yellowed parchment. It’s ancient (and impressive) history.

But on Friday, when Shoaf – the Great Lakes Conference Field MVP and a state qualifier (shot put) as a sophomore in 2017 – launched the 16-pound sphere three feet farther than the previous record (63-05.25), ancient history melted into watchable history. We acknowledge the old, but the new record is a 21-yard salute.

That history is part of what makes the Bell great. It’s a once-a-year marker of time in Rocky River Athletics. A colorful, school-spirited, sun-splashed, wind-blown, spring athletic pageant and a stage for hundreds of student-athletes to show what they can do – to us as spectators and to themselves. The stadium operations and grounds crew workers always have Rocky River Stadium looking and sounding great for the invitational’s traditional early-Friday-in-May date. With the leadership of Rocky River Director of Athletics and Activities Mark Wagner – this year’s meet dedication honoree — the Bell is treated with a decorum and professionalism uncommon on the high-school circuit. It all creates an atmosphere meaningful to the athletes, coaches, parents and other spectators.

In its early days, the meet was run on an annual March date. The meet has traditionally been an eight-team invite, but shaky weather was most certainly a ninth combatant in the early years. The move to a May date was key. The Bell now serves as a major prep for teams and athletes preparing for conference, district, region and maybe even state competitions.

The event is named in honor of Jess Bell and the Bell Family Foundation.  Jess Bell was an active runner in several west-side running clubs and was a key contributor in the construction of the first all-weather track at Rocky River Stadium. He was a great supporter of the sport and of student-athletes wearing the Double-R. In the style of a champion runner, the Bell Family Foundation has supported the meet bearing its namesake from wire to wire: from 1976 to now.

Rocky River carded seven top-3 finishes on the boys’ side and 10 on the girls’. Meet highlights for the Pirates included seniors Riley Robinette and Joe Nanni charging hard at the end of the boys’ 3200-meter run to earn silver and bronze, respectively. Rocky River boasted the meet’s top quartet in the girls’ 4×8. Allison Contenza, Mary Harte, Aoife Zuercher, and Ava Rauser earned the top step on the awards podium with a final time of 9:57.09.

The visit to the top step of the podium would be the first of three on the day for Rauser, who along with Michael Shoaf were tabbed for River’s Pirate Awards as top female and male athletes in the Bell. Rauser took gold in both the 800 and the high jump. Shoaf also had two wins on the day, taking first in the shot and the discus throw.

Rauser and Shoaf should be back again in 2019. To ring in spring once again at the Bell. In a sense, a high school track & field career is four Bells long. And River’s bellwether spring athletics event has now cycled through more than 10 generations of Pirate athletes and their competitors from across Northeast Ohio.

The Bell Foundation also endows several Rocky River Education Foundation scholarships. When this Bell rings, it reverberates from spring to fall. From the track to the classroom. And beyond.