“I like the way we played Sunday,” said Head Coach David Hendrickson. “We appeared to shore up some facets of individual games that had been holding us back. And then we came out Monday and played even better.”

Junior Ethan Mylett was emblematic of the improvements made. Mylett had scuffled a bit through a few August 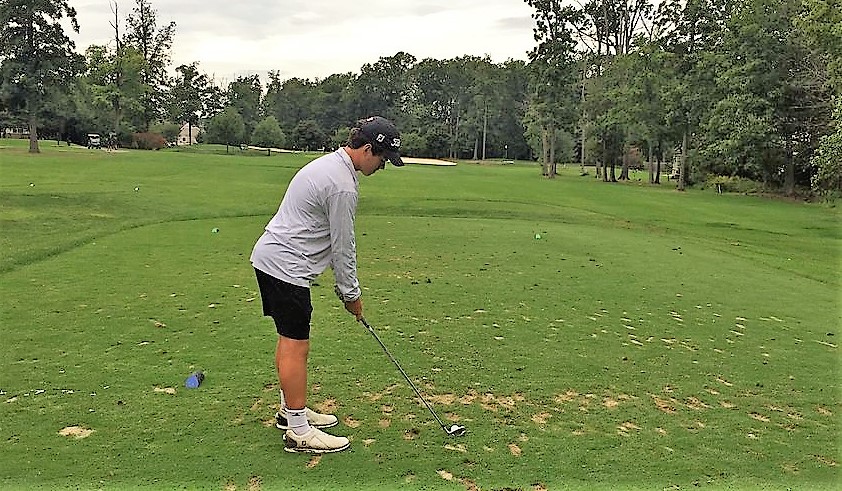 events. He failed to break 90 over three 18-hole tournaments from Aug. 7-26. But late in that stretch he started to post some impressive nine-hole scores in matches. Even still he was averaging 88.0 strokes per round as of Aug. 26. Since then, the first-year letterman has been sharp and consistent in averaging 82.5. Mylett led River in scoring at Quail Hollow, carding an 80-81—161. He had three birdies on Sunday and one on Monday in earning a top-20 finish (18th) in the 85-man field.

Rocky River’s No. 2-man over the weekend was Will Bennett, who carded an 81-83—164 (24th). Bennett was a steady source of pars over the two days, save for a near-eagle on the par-4 seventh on Monday. Bennett’s season average now stands at a team-best 81.7.

Mac Milenius had his score used both days; he fired an 83-85—168. His highlight moment was carding an eagle (par-5 fifth) on Sunday. Matthew McDonald registered a counter on Sunday, with a 92. Tommy Kelly logged a Monday counter with an 84.

“This was such a positive step for us,” said Hendrickson. “We still need to keep working on things and growing, but we’re trending in the right direction.”

Hoban won the tournament with a score of 616. Co-host NDCL finished second with a 618.

GOING LOW: Rocky River struggled its way to a 16th-of-19 finish at the Reece Alexander Invitational at Fowler’s Mill Golf Club. Since that date, the Pirates have earned a fourth-of-15 (Midview Invitational, Sept. 4), a sixth-of-nine (in a mostly DI field in the St. Edward Invitational, Sept. 15), and an eighth-of-17 at Quail Hollow. … Tommy Kelly’s 84 on Monday marked his season-best 18-hole round.

MAC IS BACK: Junior Mac Milenius scuffled his way to a 93 in his Aug. 26 round at Fowler’s Mill. Milenius has bounced back to post counting scores in seven straight rounds and team-medalist digits in two of those. His average since Aug. 26 sits at a nifty 82.0.