ROCKY RIVER, Ohio – Rocky River played to a 1-1 draw with the Solon Comets on Monday evening.

The contest at Rocky River Stadium marked Senior Night for the Pirate program, and River’s veterans and underclassmen alike performed well in what was a taut contest throughout. River’s lone marker on the night was collected by Addie Harris midway through the opening half. Outshooting the Pirates by a wide margin throughout, the Comets finally managed an equalizer early in the second half. Gabrielle Avila saw the only three shots on goal over the game’s final 27 minutes, and the junior goalkeeper was up to the task, stopping all three to preserve the draw.

Over Monday’s early minutes, the Pirate defense was solid in diffusing action in their own end. Comet passes were reversed upfield time and again by the likes of Lauren Gifford, Alexandra Gluntz and Allison Contenza. The daughters of Sam and Barb Gifford, Barry and Laura Gluntz, and Bill and Jenni Contenza kept the ball well clear of Avila over the front third of the first half.

The middle minutes of the first turned into a long drought for the River offense, one finally broken by a Maya Patti shot in the 22nd minute. It’d be nine minutes later when freshman Addie Harris corralled a bang-bang 50-50 ball in close quarters, 10 yards out from the Solon goal. Harris managed a quick shot that deflected off the Comet ‘keeper Sydney Kowitt; the ball trundled toward the middle of the net and then over the goal line for a 1-0 River lead.

The Harris goal would stand for 26 minutes of gameplay, through halftime, and to the 53rd minute of the match when the Comets got off their first shot of the second stanza. That shot — off the foot of sophomore Carley Goldberg — came after a nifty to-and-fro dribbling move from 20 yards out. Goldberg’s shot whipped past Rocky River goalkeeper Gabrielle Avila and banged off the left post and then into the net.

Goldberg’s netfinder came at the onset of a several-minute assault on the Pirate goal. Three Solon shots were filed as near-misses. A fourth required every inch of Avila’s reach on an acrobatic leap. At the apex of Avila’s skyward vault, the junior ‘keeper managed to bat the ball into the crossbar and back onto the field where she pounced on it.

Athletic plays in the offensive zone were turned in by seniors Beth Erml and Annie O’Toole. But the playmaking efforts of the daughters of Chuck and Donna Erml and Pat and Carol O’Toole were denied on a night that saw the Pirates land just 3-of-11 shots on goal.

At the other end, the Pirates withstood a 22-shot barrage by the visitors – nine in the first half and 13 in the second. The Comets put 10 of those shots on goal; nine were stopped by Avila. 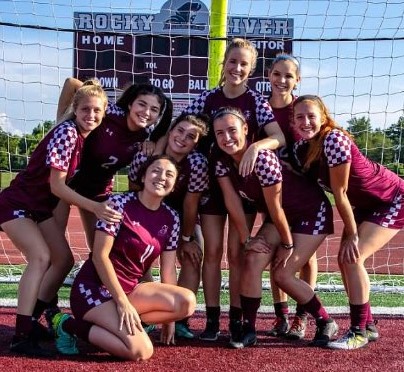 YOUNG BUCS: In Monday’s junior varsity contest, Rocky River got goals from sophomores Grace Harte and Cecilia Wischmeier in a 2-1 victory over Solon.