A flat-footed state of fairness, Wells’ way of equalizing the pedigrees of his No. 8-seed Pirates – entering the Buckeye State postseason for a sixth time in their 102-year history and the No. 1-seed Clyde Fliers – a battle-tested program that had played 12 postseason games in just the last five years (2013-17) and which came out of a talented Sandusky Bay Conference that sent no less than eight teams into the state’s November brackets.

But it was drilled into the Pirates over Rocky River’s week of practice: zero and zero. Nothing on their side of the ledger; nothing on ours.

Well, Josh Wells and the Pirates now have something on their side of the ledger. A November victory. A playoff win. A ticket for bigger and better battles further “east” on one’s printed bracket of the Division III, Region 10 tournament. Because on Friday night at Bishop Stadium in Clyde – the home of the Fliers — No. 8 Rocky River defeated No. 1 Clyde, 27-17.

A 47-minute game effort on both sides of the football – and by River special teams – lifted the Pirates to the verge of glory. An 80-yard pick-six, thwarting a final-minute, game-winning drive for the Fliers sealed it for the Sons of Blackbeard. The second playoff win in the history of Rocky River Pirate Football (River’s first state tournament win came in 2007).

On what was a chilly but dry evening in Northwest Ohio, Rocky River opened the game’s scoring on the second 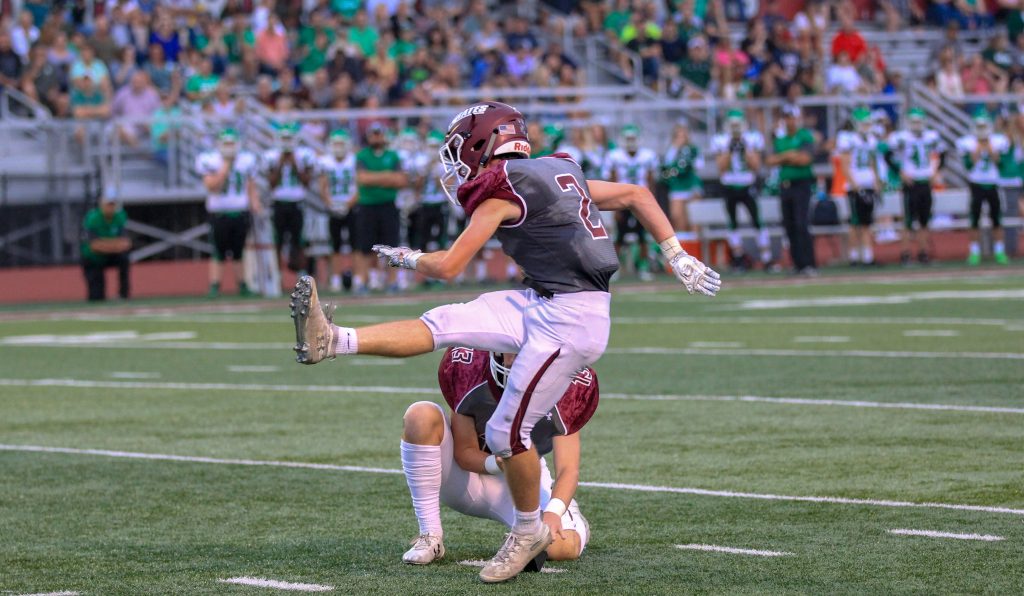 possession of the night. After forcing the Fliers into a three-and-out after the opening kickoff, the Pirates got going with an effective passing game. River moved into Flier territory after three quick passes to start its possession. A 41-yard Michael Finnegan-to-Cristain Dean pass then got the Pirates inside the Clyde 10. But the defense of the home side stiffened, and the Maroon & White were held to a 29-yard field goal after a 51-yard drive.

The Fliers cranked up their ground assault on the ensuing possession. And after a methodical drive which included the conversion of a fourth-and-three at the River 34-yard line, running back Gunner Golden punched in a 6-yarder to vault Clyde in front. Golden’s score came at the 15-second mark in the first quarter; the frame ended with the Fliers leading, 7-3.

A trio of Clyde penalties pushed the Pirates downfield early in the second quarter. Rocky River capitalized on a 9-yard Finnegan-to-Ryan O’Donnell TD pass at the 10:21-mark. Leading 10-7, a fired-up Pirate defense pitched its second three-and-out of the night, and that would be the front end of an exchange of kicks over the middle minutes of the second. That back-and-forth ended with long drive for the Fliers, one that started on their own 6 and ended up deep on the Rocky River side of the field. But the Pirate defense would eventually hold on a big third down, forcing the Fliers to kick a field goal. Clyde’s three-pointer – kicked at the 1:13-mark — knotted the contest at 10-10. A brilliantly executed quick-strike drive zipped the Pirates down the field over the remaining ticks of the clock in the second quarter. Using his arm and his legs, Finnegan led Rocky River into scoring position. The trusty right leg of Owen Bebie closed out the drive with a 38-yard field goal, and the Pirates took a 13-10 lead into their locker room at halftime.

The third quarter was a quick and scoreless one, with each side possessing the pigskin just once. A Pirate defensive stand on a fourth-and-1 in River territory helped the Maroon & White carry the 13-10 score into the fourth quarter.

A long drive early in the fourth netted a Pirate field-goal attempt, but that attempt caromed off an upright. A would-be shift in momentum was emphatically countered by yet another three-and-out stand by the Rocky River defense. Winning the field-position battle throughout, the Pirates took over at the Clyde 44-yard line with under eight minutes to play.

Half of those 44 yards needed to reach paydirt were gained on a Michael Finnegan pass to senior tight end Michael Shoaf. A pair of strong runs by senior running back Ladarrius Denham got the Pirates down to the Clyde 1. And then, with 5:35 remaining, Finnegan threw a touchdown pass to senior Ross Hartman – a 1-yarder to the left corner of the end zone. The ensuing Owen Bebie extra point lifted the No. 8 seed to a 20-10 lead.

But Hartman’s first career TD reception was no insurance, as it turned out. Rather, it was sheer necessity. For on 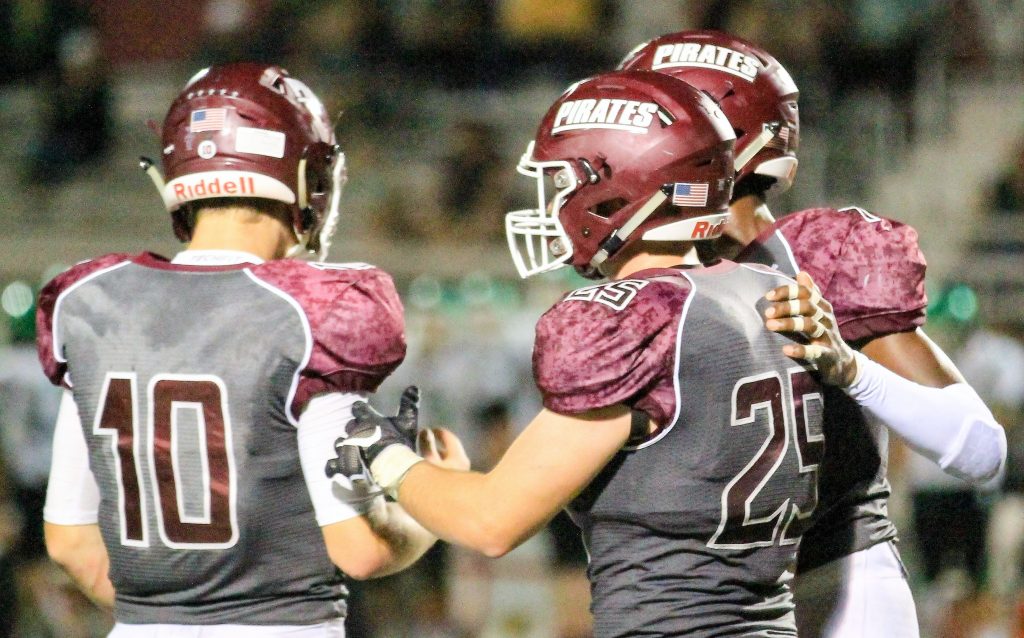 their next drive, the Fliers expertly bolted down the field and punched in a score on an 18-yard pass play. The No. 1 seed had eased to within three, 20-17.

The Pirates were forced to punt on their next possession, returning the ball to the Fliers – on the Clyde 31-yard line — at the 2:08-mark.

The next 67 seconds had Pirate fans grasping for something positive to occur. Clyde worked its way to the midfield stripe and then beyond, eventually into field-goal territory. Play-by-play, yard-by-yard, Rocky River fans witnessed the pigskin traveling in the wrong direction. And then, in the blink of an eye, it wasn’t. The football was headed the other way … with thundering speed … in the hands of a Rocky River Pirate.

Jumping an out route near the sideline at the River 20, defensive back Cristain Dean intercepte 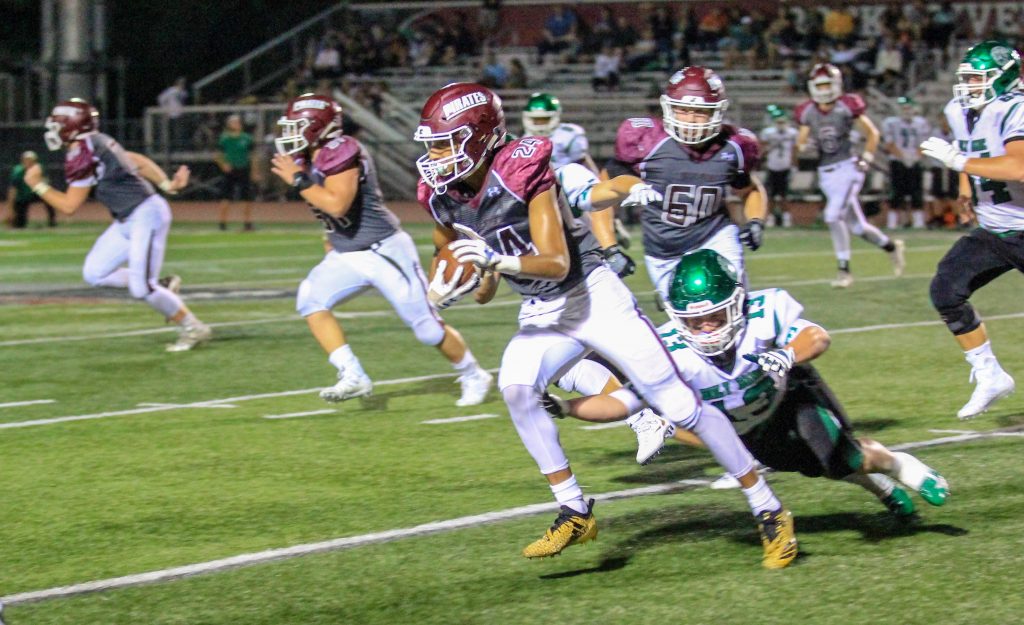 d the Flier pass and took it 80 yards for what would be the final score of the 27-17 bracket tussle.

One final cannon blast in a battle ended with the Pirate black flag still waving.

On Friday, Rocky River’s tackle football team upped its record from 0-0 to 1-0. Until midnight or perhaps sometime on Saturday, when the record flips back to 0-0.

A Pirate playoff win was earned because River players weren’t in a flat-footed standstill after all. They were ready to charge, on the balls of their feat. And now so are we, on the edges of our seats.

Ready for whatever battle presents itself. Ready for more November football.