ROCKY RIVER, Ohio — On Dec. 22, the Rocky River Pirates bludgeoned the Cleveland Heights Tigers by a score of 8-2. On Friday at Hamilton Ice Arena, the Tigers returned the favor.

Scoring five times on just six shots on goal in the third period, Cleveland Heights delivered a 7-2 victory in what was a Red Division meeting in Greater Cleveland High School Hockey League action. For the game, the Tigers (10-6-2, 3-2 GCHSHL Red Division) were led by left wing Justin Rink who notched a hat trick with three goals and an assist. With the victory, Cleveland Heights maintained a couple trends: the Tigers are now unbeaten (4-0-2) over their last six games. And the CHHS offense has been on fire — the Tigers have now scored 20 goals over their last three games.

The loss marked the Pirates’ first in Red Division play. 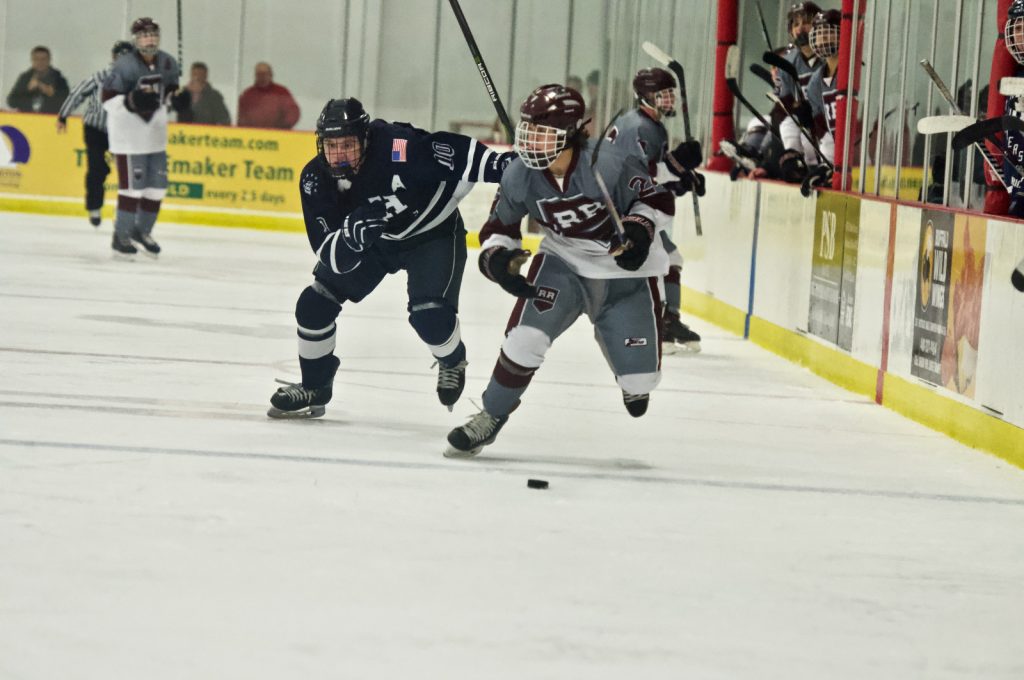 Rocky River (12-7-2, 4-1-1) applied near-constant pressure in what had the look of a two-minute power play to start Friday’s contest. But Cleveland Heights goaltender Danny Lewis fended off a few quality shots, and the game remained scoreless heading into the middle minutes of the first.

The Tigers broke the tie when Rink carried the puck up ice with speed and proceeded to bury a wrister at the 7:38-mark. The Cleveland Heights goal came on the Tigers’ first shot of the evening, and it came moments after Pirate junior defenseman Ethan Routenberg clanked a shot off the crossbar behind Lewis.

The Pirates countered three minutes later — at 3:29 — when Reece Rochester patiently planted his eighth of the season. Off a feed from Zach Pejeau, Rochester took possession of the puck, coasted across the crease and then whipped a wrister into the net. The goal came after an offensive-zone faceoff loss by the Pirates and some fine ensuing stick-work to prevent the Tigers from exiting the zone. With River doubling up the Tigers in shots on goal — 12 to six — the two sides went into intermission No. 1 tied, 1-1.

Period No. 2 was a frustrating one for the Pirates, who again held sway with regard to possession time but to no avail. The home side out-shot the visitors, 13-7, in the second, but Cleveland Heights exited the frame with a 2-1 lead. The lone goal of the second was scored off a shot that banged off the glass behind River netminder Ethan Mylett only to carom a second time and a third and bounce into the goal. Claude Lewis was credited with the goal.

And then — the Tigers pounced. Cleveland Heights upped its lead to 3-1 on a power-play goal by Eli Weisblat at the 12:02-mark of the third. The Tigers scored again 67 seconds later (Rink) to run the River deficit to three (4-1). From the Pirates? No answer.

Rink netted his third of the night at the 8:20-mark. Still no answer.

The Tigers’ Ned Trivisonno then scored two goals with 26 seconds. A 7-1 lead for Cleveland Heights.

Rocky River finally broke the trail of Tiger stripes when Aidan Dempsey scored the 30th goal of his River career.

The player of the third may well have been Lewis, who stopped 13-of-14 shots in the period. More than a handful of his saves were of the circus variety. And, with an array of blocked shots and deflected passes, packed-in Tiger blue-liners did credible work in keeping even more shots from reaching the Cleveland Heights backstop.

River outshot CHHS by a similar margin on Dec. 22. That game went all-River all the way.

Friday’s battle was a different story.

YOUNG BUCS: The Rocky River junior varsity is unbeaten (3-0-1) over its last four games. Overall, the Youngest Sons of Blackbeard are 4-6-2 on the season. Sophomore Zach Pejeau is the team leader in points, with 13 (8G, 5A). Coaches credit the leadership of Pejeau, Ian Opdyke, Christopher Cogan, and Dillon Bandi in giving River a solid foundation on and off the ice. Cogan owns a respectable .826 save percentage in his first season between the pipes, and the team has yielded fewer than 20 shots per contest.

SWORDS & STRIPES: With Friday’s result, the Pirates and Tigers are now deadlocked, 9-9-2, over 20 games since 1997. Prior to Friday’s contest, River had won 3-of-the-4 previous meetings between the two.

HAM SALAD: Friday’s loss marked River’s third at home this year and just the 10th loss at Hamilton Ice Arena since 2011. Since then, the Pirates are 86-10-2 at their Hilliard Road home.