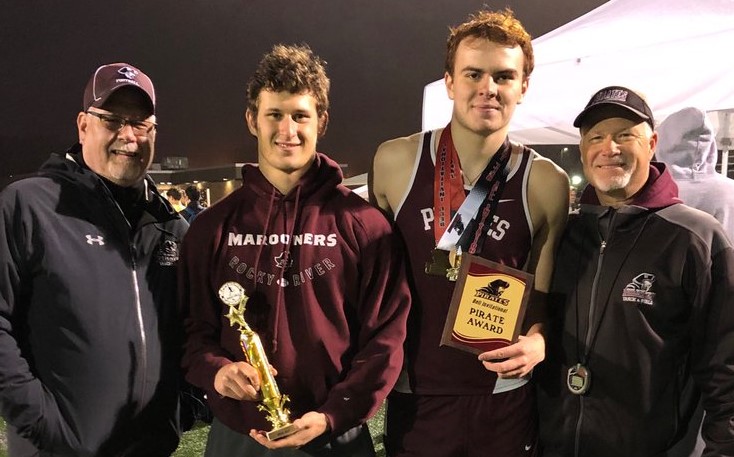 ROCKY RIVER, Ohio – Rocky River student-athletes ran, threw, leapt, and vaulted their way to tremendous performances all over the property at Rocky River Stadium on Friday. The 44th running of Rocky River High School’s home event – the Bell Invitational – gave Pirate athletes the canvas. And they came through with flying colors – Maroon & White ones – en route to placing second in combined-team scoring. [results]

Visiting athletes from Avon Lake, Aurora, Bay, Elyria, Kenston, Lakewood, and Midview made for exceptionally talented fields in each of 34 events on what was a chilled and misty late afternoon and evening at the Pirates’ home grounds in the heart of River.

“As coaches, we’re so proud of the team’s efforts on the track and in field events tonight,” said Boys’ Head Coach Mark Hogya.  “The Bell is a wonderful meet, and we’re thankful to those who put time in with their teammates working the meet, for the volunteers and the staff at the stadium.”

That stadium was bustling with activity from the time field events commenced at 3 p.m. until 9:30, when Avon Lake and Kenston were crowned as the champion teams for 2019 on the boys’ and girls’ sides, respectively. Avon Lake (125.5) bested Rocky River (115) at the top of the boys’ standings. Kenston (158.5) outlasted River (130) and Avon Lake (114.5) among the best on the girls’ side. Kenston won the combined standings by the slimmest of margins – say, by a nose on this Kentucky Derby weekend: the Bombers tallied 145.5 points to edge the Pirates (145) by a mere half-point. Avo 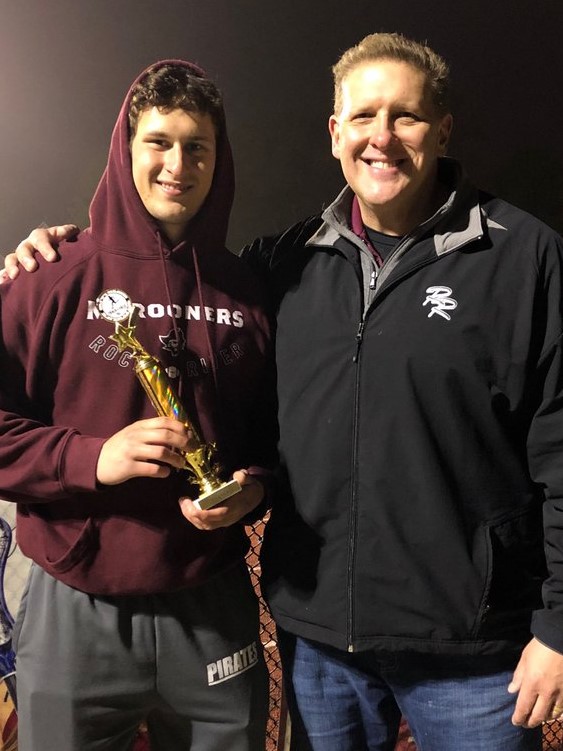 Shoaf, who closed out his Bell career having won 7-of-8 throwing titles, was named the invitational’s MVP on the boys’ side. His meet exploits over four years included breaking a 42-year-old record in the shot put in 2018.

Hill’s second in the 110 hurdles came behind a meet-record performance (14.25 seconds) logged by Lakewood’s Tyler Hannah. Hill’s time (14.97) slips into the Rocky River record book as a top-10 in the event. The Pirates also registered a program top-10 in the 4×800-meter relay (Saad, Jack McDonough, Daniel Hornig, O’Donnell). That quartet posted a time of 8:07.26 which earned them a top step on the awards podium afterward.

On the girls’ side, standout performances were posted by Leah Schellentrager (first in long jump, second in 200, piece of two top-3 relays), MaKenna Pfaff (second in 100 hurdles, third in 300 hurdles), Allison Contenza (third in 800, part of three top-3 relays) and Sam Coleman (first in the mile, second in the 2-mile).

River hurdlers piled up 15 team points in placing third-fourth-fifth (Pfaff-Lydia Brandt-Karissa Holl) in the 300-meter event. Brandt was also in for quarter points on two relays. 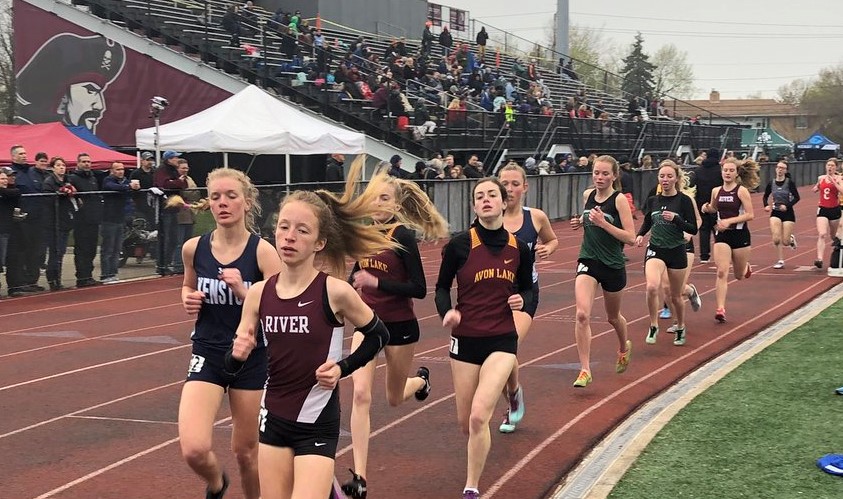 Sam Coleman’s day will stand as a memorable one. Coleman showed a remarkable late kick in edging Kenston senior Kate Taylor by .13 seconds in the mile. She then gutted out a second-place finish in the 2-mile, finishing .16 seconds behind Kenston’s Ellie Pleune.

Fractions of seconds and inches were everywhere on the track and around it as part of the field events. Seconds and inches being gained and lost — sometimes in dramatic fashion and often just as inner, personal triumphs – by nearly 500 athletes putting their best on display at Rocky River Stadium.

As happens every spring when the Bell rings.

DEDICATED COACH: Head Coach Mark Hogya was the honoree at this year’s meet dedication prior to the running of the championship session in the evening. Hogya has been a well-respected track and football coach for 27 years, and his River boys’ squads have won nine conference titles, including four in a row since the Great Lakes Conference was founded in 2014-15.