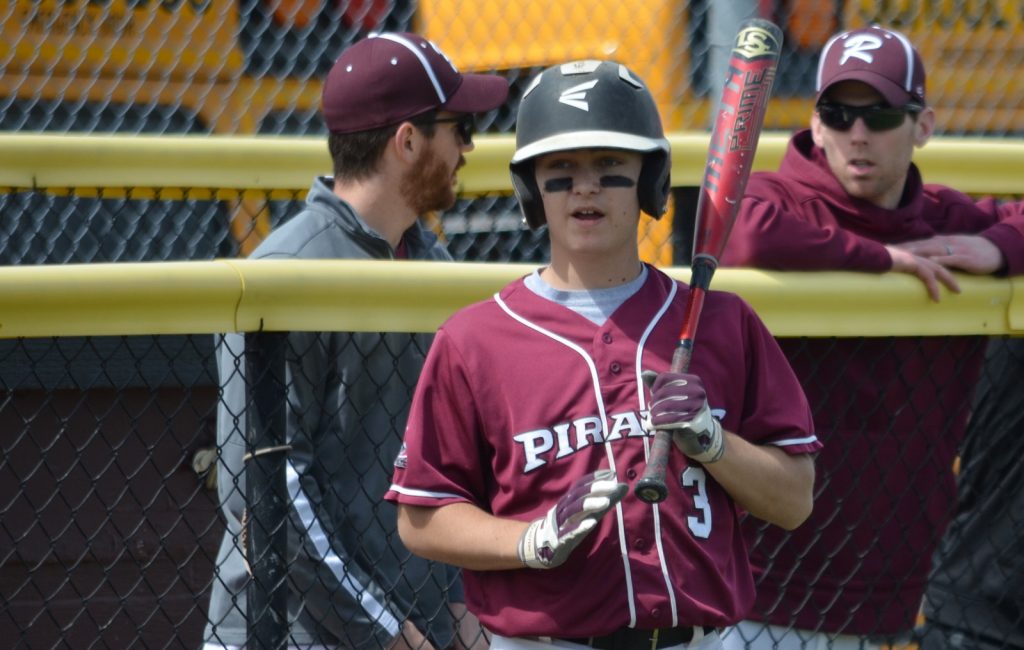 A mostly-senior-led cavalcade of clutch hitting and gutsy pitching was on display in what was a thriller under azure blue skies at Rocky River Field. In a game relocated to the Bus Yard due to unplayable field conditions at Brookside, the No. 8-seed Cardinals batted as the home team. Brookside battled back late for what appeared to be a comeback win over the ninth-seeded Pirates. But the Maroon & White got a pair of get-on-my-back, do-or-die hits – from seniors Owen Jaite and Ross Hartman – in a wild seventh-inning rally, and now they – not the Cardinals – advance in the Parma District bracket of the 2019 Ohio DII Baseball Tournament.

Rocky River struck first in the game when Owen Jaite banged a two-out, two-run double to left field, plating Joey Pike and Braedon Spies, both of whom had reached on singles. Right-handed starting pitcher Dillon Bandi was sharp early, backing up Jaite’s big hit with a one-two-three bottom of the second. The Cardinals did strike for an unearned run in the third, but Bandi got the Pirates out of the inning cheaply enough — he left the bases loaded, getting a strikeout and a ground ball-out against Brookside’s No. 4- and No.-5 batters.

The Pirates upped their 2-1 advantage to 4-1 in the top of the fourth when they coupled a Cardinal error with another RBI hit by Jaite. Again, River’s runs came in the clutch with two outs in the inning. Brookside got one of those runs back in the bottom of the fifth. After the Pirates were held scoreless over the fifth and sixth frames — despite plenty of chances (River stranded six over those two innings) — the Cardinals came to bat in the bottom of the sixth trailing, 4-2.

Brookside put together a four-run bottom-of-the-sixth, and things looked bleak for the Sons of Blackbeard, endured just about every torture baseball score keeping allows. The Cardinals reached base via a hit batsman (leading off the inning), a walk, a single, a double, a dropped third strike, another double and a Pirate error. Right-hander Tyler Louis came on to relieve Bandi during the Brookside barrage, an onslaught that would see the Cardinals vault in front with four runs.

And things could have been worse in that Brookside inning — Louis ended the inning by striking out Brookside’s ninth to the plate in the rally. Two runners were in scoring position to witness the punch-out.

In the top of the seventh, Rocky River rallied. First, a one-out single by Jack White. Then a walk drawn by Joey Pike. Then, Grant Eversman bunted but safely reached base on a fielder’s choice. Bases loaded.

But then a foul-out for out No. 2, and the Pirates were nearly dead and buried. Enter River’s lead actor in the drama — literally the Pirates’ leading man as leadoff hitter: Owen Jaite, who had already collected three two-out RBIs on the day and who was 3-for-4.

And Jaite came through. The senior center fielder whacked a single to center; White scored; Pike scored; and the game was deadlocked, 6-6.

Fellow senior Tommy Kelly was then hit by a pitch to put Pirates on every corner of the diamond. And 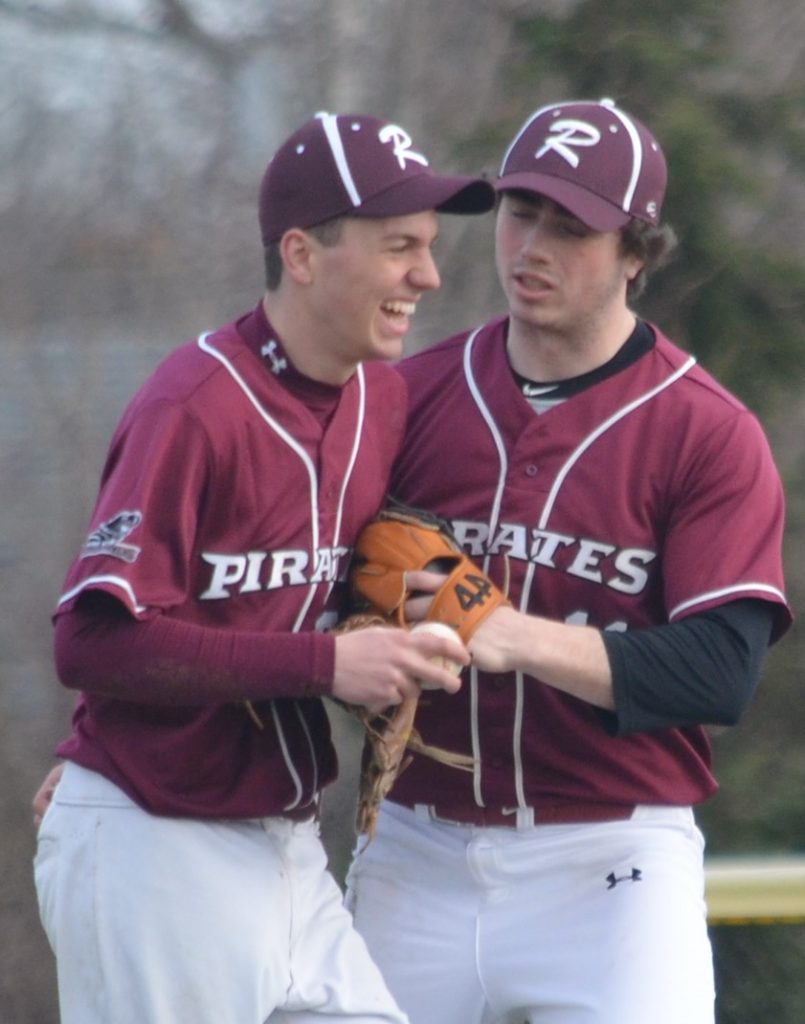 that brought another senior — and the team’s leading RBI man — Ross Hartman to the plate. Hartman had shaken the rust off an 0-for-3 start to the game with a single the previous inning. He stood in, looking to get a hit and leapfrog his Pirates back in front.

Hartman took a wide one. And then a second. And then the Cardinal pitcher worked the count back to 2-and-2. A third ball or strike would not be forthcoming. Hartman clobbered one to center — extra bases! Eversman scored. Jaite scored. Kelly motored around, and he scored. Hartman was out at third in trying to stretch the double into a three-bagger. But he was nonetheless the proud owner of a two-out, three-run double. A postseason two-out, three-run double to break a 6-6 tie and put Rocky River in front, 9-6.

Tommy Kelly would take the mound in the bottom of the seventh. And Kelly closed the door. Or more accurately, slammed it shut with two strikeouts and a ground-out after the Cardinals had put their lead-off man aboard with a single.

A lead, a tie, a deficit and a remarkable comeback. All in a few exchanges at the plate on a tremendous Tuesday at Rocky River Field.

For the game, the Pirates out-hit the Cardinals, 12-8. River batters went 8-for-18 (.444) with runners in scoring position. Pirate pitchers held Brookside to a 3-of-17 (.176) mark in such situations. And all nine Rocky River runs were scored with two outs.

Undeniably, the clutch was let out at the Bus Yard.

PITCHING IN: Dillon Bandi’s line included 5-2/3 innings pitched, six runs (three earned) allowed on seven hits and five walks. Bandi fanned eight. Louis extricated River from its sixth-inning jam and was tagged with the win. Tommy Kelly’s seventh-inning work earned him his second save of the season. Joey Pike was a key performer in going the route behind the dish.

O-MY!: Owen Jaite finished the game 4-for-5 with five runs batted in. Jaite’s performance was a comeback within a comeback — he had been 0-for-his-last-11 prior to Tuesday’s tournament tilt.

MEN OF STEAL: Jaite stole two bases and Braedon Spies added three more in a game that saw the Pirates credited with eight thefts. Spies went 2-for-4 to leg his third multi-hit game of the season.

DOUBLE TAKE: Ross Hartman’s bases-clearing eventual game-winner marked the 26th double of his career. Hartman has eight two-baggers this year and a team-high 25 RBIs. He has now knocked in 55 runs over the last two seasons.