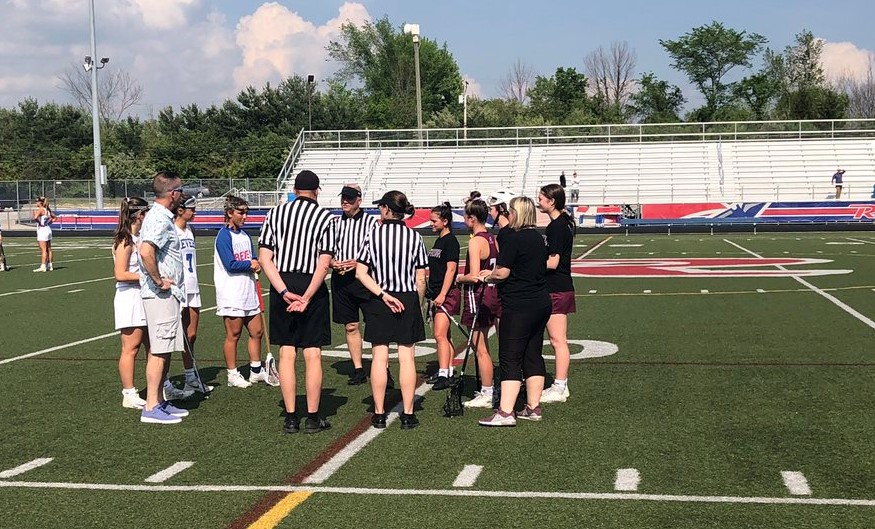 RICHFIELD, Ohio – The 2019 girls’ lacrosse season is in the rear-view mirror for most of the teams in Buckeye State. Not so for the Rocky River Pirates.

On Saturday evening, the Pirates hoisted the black and traveled to Revere to take on a talented Minutemen team that had lost just three times all season and just once since April 6. And the Pirates didn’t merely survive and advance in the Ohio DII Northwest Region brackets. They took charge with what Head Coach Lizz Steinmetz termed the team’s best game of the season. And they defeated the Revere Minutemen, 16-10.

The Maroon & White broke free from what was a 7-6 game at the half by scoring seven of the first eight goals of the second stanza. Five different River shooters found twine during that stretch, a 12-minute surge that saw the Pirates take a 14-7 lead.

“Our offense was patient today,” said Steinmetz, whose River crew has now scored 16 goals or more in three of the team’s last four games. “We did a good job spreading the field and controlling long possessions.”

And for every score was a scoop or two at the other end of the field.

“The defense was great at coming up with ground balls and clearing the zone,” said the Pirate bench boss.

Both sides went on three-goal runs during the first 12 minutes of the opening half. The game was deadlocked at 4-4 when Revere’s Jordan Zablo scored at the 13:52-mark of that first half. Zablo, who would go on to score each of Revere’s 10 goals for the game, netted a go-ahead goal at 8:17. On an assist from Rachel Solecki, fellow senior Lauren Cain answered for River not but 90 seconds later. The goal re-tied the game, at 5-5, and it marked the 200th goal of Cain’s marvelous prep career.

Zablo and Cain then traded goals to run the score to 6-6. Allie Kysela scored on a Sam Miller feed at 4:10, and that would be the score that split the two teams at the end of a well-played, hard-fought first half.

At 23:05 of the second half, it was a goal by Gabrielle Avila that set the Pirates on their run of 7-1 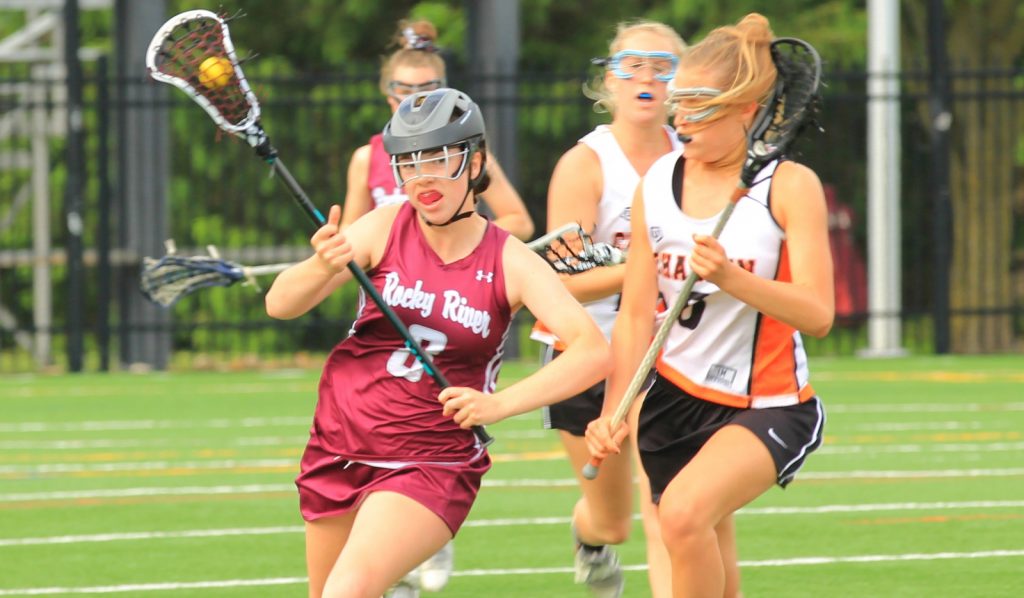 dominance. Saves in the cage on the defensive end (Hannah Burgess would finish the game with eight stops), and nothing but net on the offensive side. Avila, then Duncan, then Curry. Curry again, then Miller, then, then Solecki. And one more for Curry, who would finish the game with five goals and four ground balls while giving the Pirates a solid performance on midfield draws. Seven goals against one for the home side.

Still, even after the surge plenty of time remained on the clock. Especially for a desperate Minutemen (15-4) team that had averaged 16.3 goals per game over their previous 10.

But from that point forward, Burgess – and the hustle play in front of her – would yield but three scores.

They took charge. They took over. They took control on ground balls. They took over midfield in the offensive and defensive transition game. And they took their time on offense. And now they take their talents further into the state brackets.

Because the Rocky River Pirates are playing their best lacrosse right now. Hard work laid that opportunity to do so before the team on Saturday.

And they took it.

SCORIN’ LAUREN: Senior attacker Lauren Cain finished Saturday’s playoff affair with five goals and two assists. Cain now has 78 goals on the season; her now-202 all-time netfinders are comprised of 78 from this year, 79 from last year, 33 from 2017 and 12 from 2016.

ON DECK: Rocky River will now travel to Cuyahoga Falls to take on Walsh Jesuit in a regional semifinal match-up on Tuesday (time TBA).