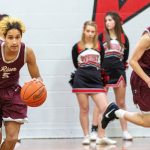 BAY VILLAGE, Ohio — With a swashbuckling second-half performance the Pirates gave a game effort, but Rocky River fell to Bay, 68-58, in district tournament play on Friday. After falling behind a powerful Rocket team, 7-0, in the early going, River worked its way back into the contest with gutty team play over the third 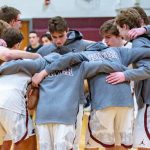 ROCKY RIVER, Ohio – The Pirates advanced in postseason play, as Rocky River defeated Firelands, 74-60, on Tuesday night. Rocky River (15-8) set up the home-court victory with a dominant first half, one that saw the Pirates outscore the Falcons, 42-18. In a bounce-back effort after a disappointing 69-48 loss to Bay on Senior Night 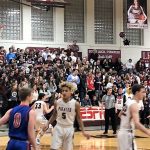 ROCKY RIVER, Ohio – Time for bracket-ball. Rocky River closed out its regular season with a 68-49 loss at the hands of the rival Bay Rockets on Friday night. Playing before a big Rocky River Gymnasium crowd on what marked Senior Night for the River program, Bay (16-5, 8-4 GLC) jumped out to a 17-2 lead and 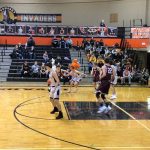 Boys Varsity Basketball · Feb 20 Undone by one at Normandy

PARMA, Ohio — The Invaders turned the tables on a one-point loss to the Pirates last month, as Normandy defeated Rocky River, 59-58, in Tuesday-night Great Lakes Conference action. Normandy (10-12, 4-7 GLC) withstood a monster third by River’s Roundball Raiders and then pulled off with win with an impressive fourth quarter. Rocky River (14-7, 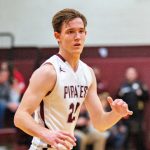 CLEVELAND – Rocky River bounced back from a Friday-night loss at Elyria Catholic and a two-game losing streak with a 72-49 victory at John F. Kennedy on Saturday night. Senior Luke Coyne led the way with a 20-point, eight-rebound, four-steal evening for the Pirates, who tallied 13-plus points in each quarter. “We got off to 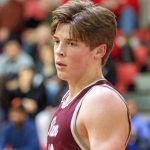 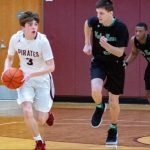 ROCKY RIVER, Ohio – Rocky River dropped a home game for just the second time this season as the Pirates were defeated by the Fairview Warriors on Tuesday night. Earning their third straight victory in the annual Battle of Wagar Road, the Warriors broke free from a close tangle late in the fourth quarter to 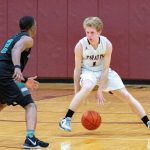 ROCKY RIVER, Ohio — A remarkable lock-down defensive effort and lights-out shooting propelled the Pirates to an all-River rout, as Rocky River defeated Lutheran West, 74-44, on Saturday. A shot-blocking, ball-hawking Pirate defense held the host Longhorns to just two free throws in the opening quarter and nine points over the first half. At the

ROCKY RIVER, Ohio – The Pirates got another shutdown effort on defense and put on a tic-tac-toe passing clinic on offense, as Rocky River defeated Valley Forge, 75-44, on Tuesday night. Tommy Ruma (20 points), Luke Coyne (19) and Cristain Dean (15) were the primary beneficiaries of – and co-conspirators in – a Rocky River 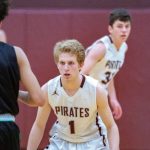 ROCKY RIVER, Ohio – The Oberlin Phoenix had scored 71 points against a 12-5 Clearview squad the night before. The Phoenix had scored 66-plus in 4-of-their-5-previous games, and that included a 93-point effort on Jan. 18. Enter the rock-solid seven-man rotation of the Rocky River Pirates. With every Phoenix shot, pass and dribble contested, the