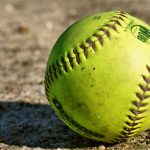 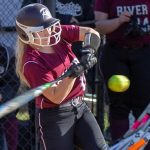 Varsity Softball · May 9 A resilient River runs through it

ROCKY RIVER, Ohio – Rocky River posted crooked numbers in three straight innings (second, third, fourth), as the Pirates defeated Clearview, 10-6, in sectional tournament action on Wednesday. The Pirates countered a three-run second by the Clippers with four in the home half of the inning. By the end of the fourth, River would lead, 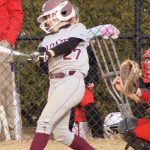 Varsity Softball · May 8 Extra effort, but Pirates fall in 10

NORTH OLMSTED, Ohio — A remarkable back-and-forth battle ended with the Pirates on the wrong side of a 12-11 score in a 10-inning tussle on Tuesday. A resilient Rocky River squad rebounded from a nine-error game on Monday, as the Pirates gloved and pitched and hit and ran their way to tie scores with the

ROCKY RIVER, Ohio – A wild, last-licks, five-run rally boosted the Pirates to a game-one victory and helped Rocky River earn a split in two Saturday games against Lorain. A game-winning run pushed across due to a Titans error capped off the bottom-of-the-seventh surge, and River won Saturday’s morning opener, 12-11. Lorain closed out the

ROCKY RIVER, Ohio — Hits continued to be tough to come by for a Rocky River offense which has been scuffling of late. The Pirates managed just one base hit — a first-inning single — in a 14-0 loss to Holy Name on Tuesday. The Pirates (5-11, 1-9 Great Lakes Conference) were no-hit by Holy 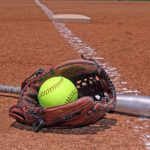 PARMA HEIGHTS, Ohio – Senior pitcher Nicole Camarati tossed a no-hitter, as the host Holy Name Green Wave defeated Rocky River, 11-0, in a Great Lakes Conference run-rule contest on Monday. Camarati walked two and fanned nine in what was a taut 2-0 affair until the bottom of the fourth inning. Holy Name scored one in 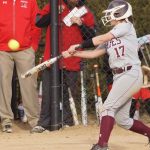 PARMA, Ohio – Rocky River was swept by Normandy in a Great Lakes Conference doubleheader on Friday. The host Invaders slugged and walked their way to victories of 16-7 and 18-8 over the two games at Nike Park. In the opener, a six-hit, five-run fifth inning leveled the score between River and Normandy at 7-7, 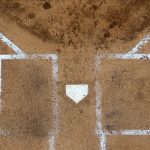 ROCKY RIVER, Ohio – Rocky River was routed by Bay, 21-1, On Thursday. Two days after downing the Rockets, 13-9, in Bay Village, the Pirates had all kinds of trouble in stopping a continuous Rocket orbit around the bases in a five-inning, run-rule game at Pirate Field. Bay had monster innings in the third and 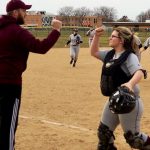 BAY VILLAGE, Ohio – Rocky River snapped a four-game losing skid with a 13-9 victory over the Bay Rockets on Tuesday. The Pirates plated runs in 6-of-7 innings in picking up the Great Lakes Conference win at rain-swept Rocket Field. The victory marks River’s first since April 13. The Maroon & White got three hits

ROCKY RIVER, Ohio — Rocky River bolted to a great start against a talented Parma squad on Monday, but an early lead would slip away as the Pirates fell to the Redmen, 8-4. After starting pitcher Marissa Smiley wriggled out of a first-inning jam, two-out RBI singles by Lexi Aguilar and Lizzy Kysela keyed a